Bao Steel is a location-based interactive documentary which examines the tensions between the Bao Steel factory and the people living around it.

Users press the 3D printed buildings on the laser-cut map to access different documentaries. The latest version is shown at the Mixc Mall in Shanghai.

The project is featured in one of the most impactful WeChat(Chinese largest social media platform) official account with over 10,000 followers, which covers innovative works in new media and design.

users interact with a tangible map by pressing the 3D-printed buildings: shots from the show

users interact with a tangible map by scanning the QR codes on the map:

Three documentary pieces are embedded into three QR codes on the map.

Bao Steel is located on the northeast side of Shanghai. The factory was constructed in 1979 to help China catch up with Japan economically. Since then, the factory has boosted the economic growth of Shanghai, and on a larger scale, China. Nevertheless, the pollution generated by the factory negatively affect people’s lives around the factories; the housing price is increasing rapidly. The factory, therefore, becomes a center of controversies.

I and my co-producer used location-based interaction to show the Bao Steel factory and its relations with the local community in a tangible way.  We used the laser cutter and recycled cardboard to cut out the map where users could interact with. We then used 3D printer to print out the model of these places and place them next to the QR code on the map to help the audience better understand the place. 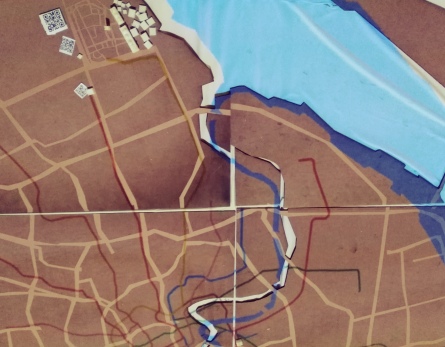 the map and the projection mapping effect

After scanning the QR code, users could access the documentary piece. The footage was captured in three special places(Fujin Metro Station, Leye Village, and Zhongye Hospital) to show Bao Steel’s impact on the local community.